Sewage and the Science of Public Health Wastewater is a topic that the average New Yorker doesn’t think about often, but perhaps we should. Sewage and run-off, over a billion gallons of which are treated every single day in New York City by 14 wastewater resource recovery facilities, are a valuable resource for scientists.

Wastewater sampling has been a useful tool for public health researchers tracking the COVID-19 pandemic over the last two years. The Centers for Disease Control (CDC) launched the National Wastewater Surveillance System in September 2020 as a means of tracking virus spread and community prevalence. Viral genetic material is transmitted in fecal matter to the sewers and waste treatment plants, where researchers can take samples. Their work can serve as an early warning of community spread, track variants, and inform public health strategies for responding to the virus. Even better, wastewater surveillance doesn’t require individuals to seek out healthcare in order to capture information, meaning that the resulting data can include people who may be asymptomatic, who have taken home tests, or who have not been tested at all.

Wastewater data have figured prominently in several interesting COVID-19 stories recently in the news. In January 2022 the CDC reported that mutations associated with the Omicron variant showed up in New York City wastewater in November 2021, before the variant was officially reported in South Africa and at least a week before the first U.S. case was identified via clinical testing, suggesting that Omicron was likely circulating in communities before cases could be officially confirmed. And The New York Times recently reported on mysterious fragments of viral RNA with novel mutations detected in NYC wastewater, which are stumping researchers. They haven’t been able to pin down where these fragments are coming from, nor why these mutations have not shown up in clinical testing of human or animal populations in the city. 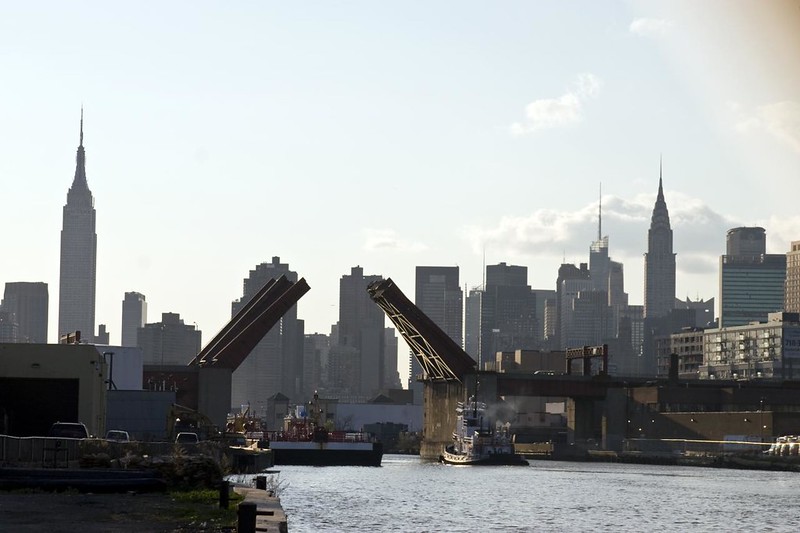 “Pulaski Bridge Drawing” by Pabo76 is licensed under CC BY-NC-ND 2.0

Two John Jay College researchers, Dr. Shu-Yuan Cheng and Dr. Marta Concheiro-Guisan, are also big proponents of wastewater sampling studies as a public health tool. Their own research, published in 2019, tracked drug use over one year in New York City, using one-time grab samples to test for levels of cocaine, nicotine, cannabis, opioids, and amphetamines in the sewage. Now, the scientists are collaborating with non-profits that test the health of the city’s waterways, trying to correlate levels of pharmaceuticals in our rivers with the amount of harmful bacteria.

To Dr. Cheng and Dr. Concheiro-Guisan, wastewater analysis’s great strength lies in early warning and early intervention. “It’s a great tool for prediction, for public health, crime fighting, and disease [prevention] purposes,” says Dr. Cheng. “The official report is often too late, but if you can do an early intervention, find the issue and start addressing it, there’s a lot you can do.”

“We looked at wastewater because we saw the utility,” says Dr. Concheiro-Guisan. “This is a different application [than viral tracking] but with the same thought: that what we eliminate from our bodies tells you a lot about your population.”

However, the United States is late to the game. Though the CDC has had results with its national COVID-19 tracking program, both researchers lament the lack of a centralized American body to apply this research to other public health applications. They’d like to see the U.S. follow the example set in European countries, China, Australia, and increasingly in South America, where governments have applied wastewater sampling to create campaigns warning their citizens about novel psychoactives, catch drug manufacturers, and more.

“It’s a very important public health tool that is showing results,” says Dr. Concheiro-Guisan. “If you start in the biggest city in the country, if you start in New York, then others will follow.”

Dr. Shu-Yuan Cheng is an Associate Professor and Chair of John Jay’s Department of Sciences. Her research is in the areas of toxicology and forensic pharmacology, including the roles that environmental toxins play in neurodegenerative diseases, identifying the target genes and signaling pathways affected by environmental toxins, and investigating pharmacological mechanisms of anti-cancer medications.

Dr. Marta Concheiro-Guisan is Assistant Professor of Forensic Toxicology in John Jay’s Department of Sciences. Her research focuses on the development and validation of analytical methods by gas and liquid chromatography tandem mass spectrometry and their application to different specimens, the detection of drug exposure during pregnancy, and the toxicological study of new psychoactive substances.

“Newtown Creek Wastewater Treatment Plant” by Pabo76 is licensed under CC BY 2.0